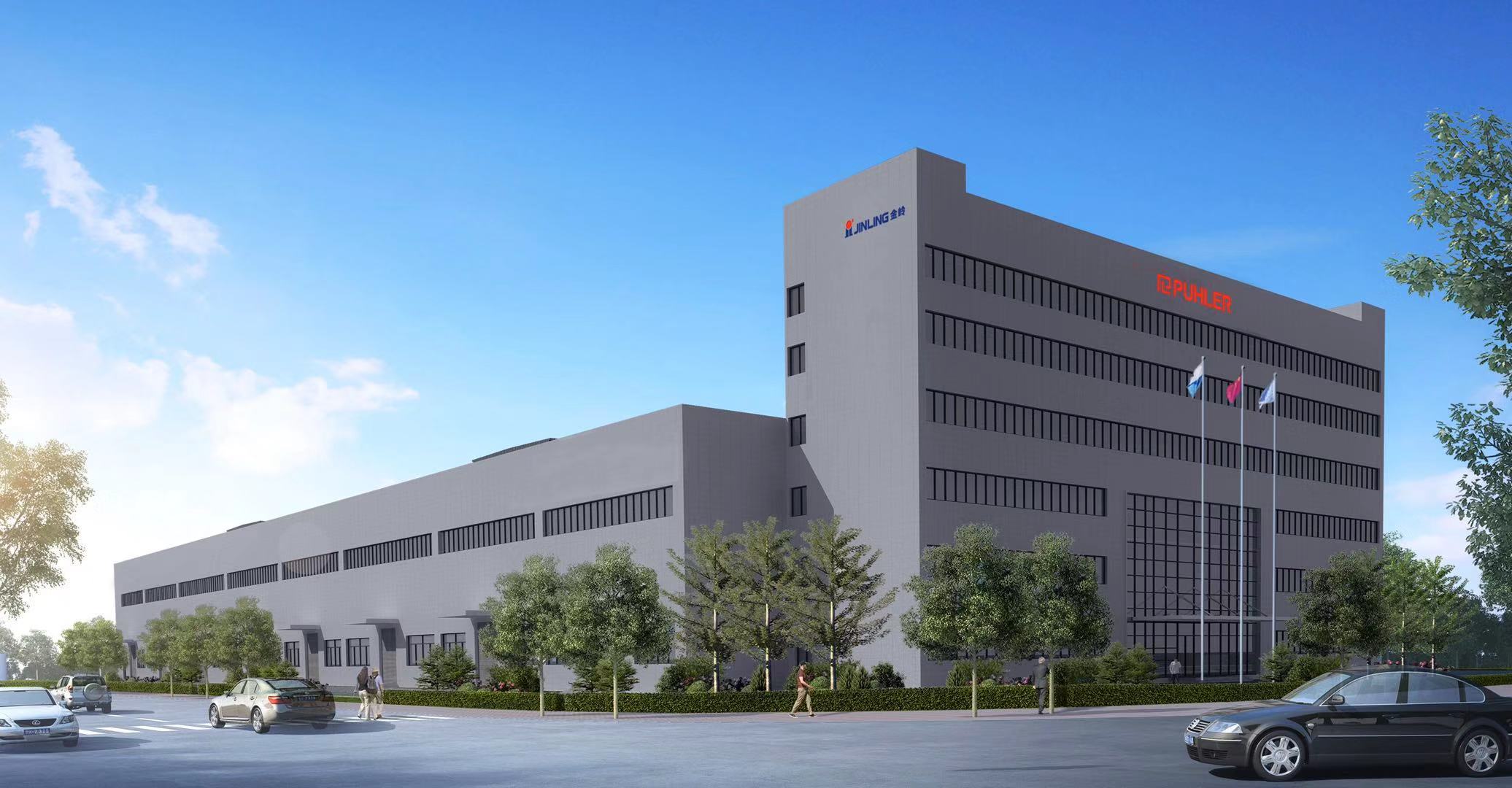 JINLING（Hunan）CNC Machine Tool Co., Ltd (inherited from Changsha No. 2 Machine Tool Works) was established in 1956. It is a designated lathe manufacturer of the former Ministry of Machinery and a state-owned medium-sized enterprise. Now as a national high-tech enterprise and the first batch of 100 innovative enterprises,the restructuring was established in August 2017 (abbreviated as Jinling Shares), a national high-tech enterprise specializing in CNC cutting / grinding equipment and intelligent grinding/polishing equipment. The group occupies an area of more than 100 acres, has R & D center, office building, joint plant nearly 15,000 square meters, nearly 200 various types of equipment, nearly 100 sets of testing equipment, assets of more than 100 million yuan. Today, under the pressure of manufacturing investment, our customers need not only our products, but also our diversified services, including providing customers with one-stop dedicated machines, flexible production line overall process solutions and new equipment financing lease services.

The influence of the company is increasing. The company will always adhere to the corporate spirit of “responsibility-oriented, innovation-oriented, development-constant, and dedicated-to-promise”, with “achievement of cutting-edge manufacturing and revitalization of national industry” as its corporate goal and mission, and strive to innovate, forge ahead and build the company The core business card of "One-stop precision special machine, flexible production line overall solution and intelligent manufacturing technology solution professional provider" is committed to becoming a leader in the field of CNC grinding equipment and intelligent equipment.

Hunan Jinling Machine Tool Technology Group Co., Ltd. takes "the ingenuity to make the world's best machine" as its mission, has created a management model of "intelligent leadership, two-wheel drive, ingenious manufacturing and global service." Our company have completed the restructuring of state-owned enterprises and created a private joint-stock enterprise led by the research and development of high-end CNC machine tools. Defining customer needs is the meaning of our existence! We have responsibility to make machine tool selection easier, and we have an obligation to help the machine tool industry develop rapidly in the new era.

Intelligent manufacturing leads the future. As industrial mother machines, machine tools are important foundation for equipment manufacturing. Since 2002, with the rapid development of the economy, China's machine tool industry has gone through more than ten years of brilliant development. Jinling has also completed a transformation from small to large under this background. But we know that scale alone is not enough,we need to be stronger.

Since 2012, the economic and market environment has undergone profound changes, customer demand has been rapidly upgraded, and traditional products have been in excess. At the same time, a new round of the world's industrial revolution is accelerating, all countries have put "smart manufacturing" at the core of industrial development. These changes undoubtedly indicate that the traditional industrial development model with production factors as its core is unsustainable, and we have entered the era of innovation-driven development.

Facing the future, I believe that with our wisdom and courage, the support of customers and partners, we can create miracles again and leave our generations of Jinling people in the long river of industrial development. Let us continue to work hard to create our own future! Sincerely welcome friends from domestic and abroad to come to our company to guide the work, negotiate business and talk about a bright future. 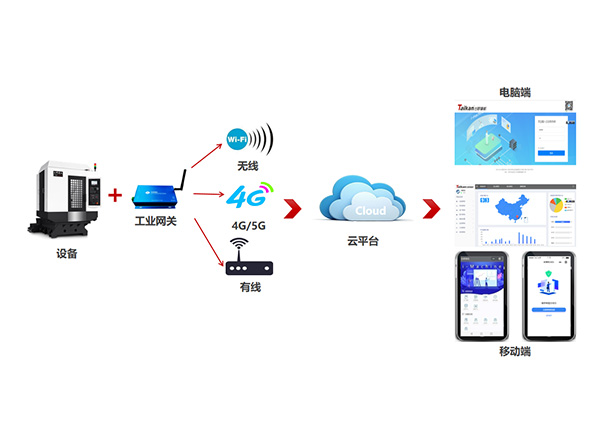 An industrial gateway is installed on each device, and the device's operating data is transmitted to the cloud platform for statistics and analysis through the gateway's own WIFI or 5G signal, cable and other transmission methods, and then provided to the computer, mobile, TV, etc The terminal equipment manufacturer performs a variety of demonstrations.
Qualification
Record

In 63 years, from the Changsha No. 2 Machine Tool Plant at that time to today's Jinling Co., Ltd. with fixed assets of 350 million yuan, large enterprise groups with basic equipment industrial machinery and 5G intelligent equipment as the leading industries. Jinling Co., Ltd. has increased at a rate of several times each year. The rapid development has created the "Jinling Speed" in the development of Hunan machine tool enterprises.

Jinling's success has sufficient reasons: the personal efforts of employees, the wise decision-making of the leadership, the high sensitivity to changes in market demand, outstanding innovation ability, and stable and high-quality core business. Meeting the challenges of the times and the market has always played an important role in the formation of the company's development direction. This is exactly what Jinling has been doing. We are always one step ahead in creating benefits and increasing value for our customers. 1955-Hunan Provincial Labor Bureau Technical School (later changed to Changsha No. 2 Machine Tool Factory Technical School, which was merged into Changsha Vocational and Technical College after the corporate restructuring in 2003) was established in Jinpenling, South District, Changsha, and enrollment began in 1956. National economic construction has transported a large number of technical talents. 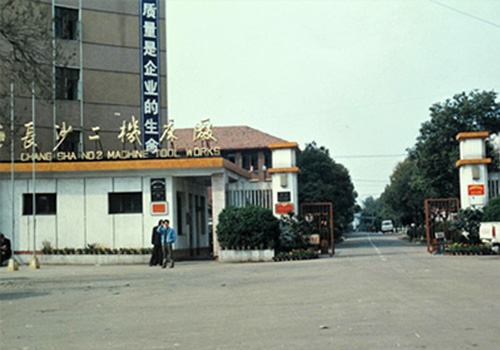 1972 —— "Jinling Brand" CW61 (2) 63A universal lathe was put into production, and became the leading product of the company. 1984——The CW61 (2) 36A universal lathe developed in cooperation with the Department of Mechanical Engineering of Hunan University was successful. The prizes were selected into the compilation of national environmental technology achievements. In December of the same year, CJS6136A won the “spring swallow” Commemorative Award for Excellent Exhibits at the New Exhibition of Machine Tool Tools. 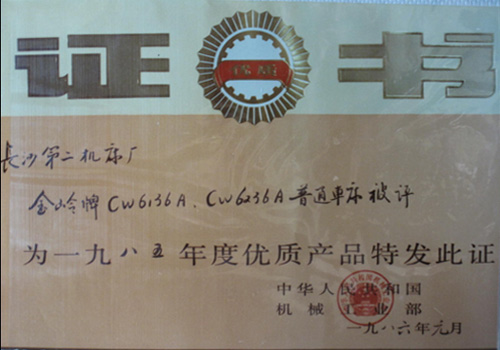 From 1985 to 1986-CJK360, CWK360, NC630 economical microelectronic automatic control lathes, CX360, CX630 digital display lathes and other numerical control products have been developed, becoming "Hunan Province applied microelectronic technology model demonstration enterprise." The Provincial Machinery Department organized an inspection and acceptance of the "process breakthrough" model pilot enterprises in our factory, and our factory became the first qualified enterprise in Hunan Province to have a pilot model breakthrough in technology. 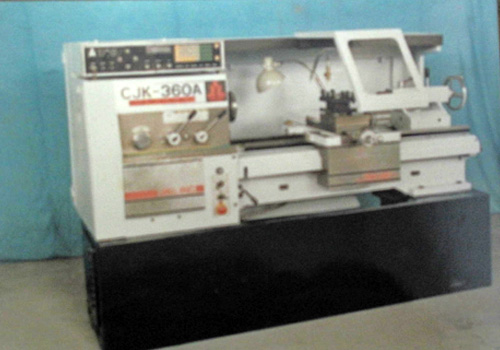 1988-CW61 (2) 63A universal lathe passed the provincial excellent appraisal. The appraisal committee believes that: "This machine has reached the advanced level of similar domestic products and filled the gap in the province." In the same year, the company was appraised as “Provincial Advanced Enterprise in Quality Management”. In January, it was elected as the executive director unit of China Machine Tool Association Lathe Association 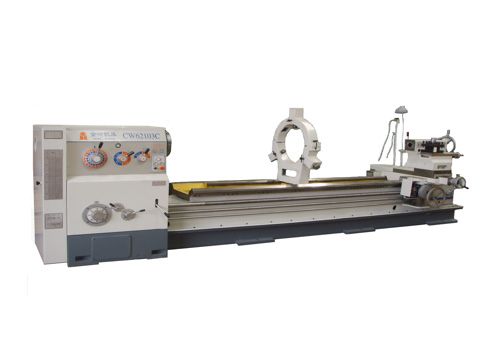 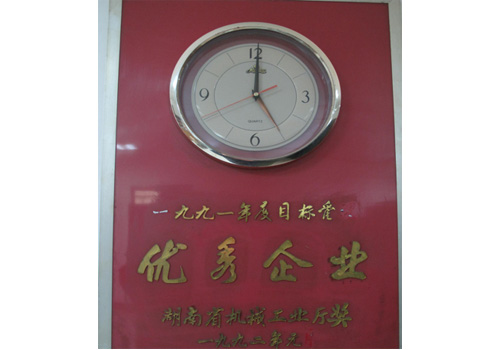 1991——Appraised as a state-owned medium-sized enterprise by the competent department of the Changsha Municipal Government. In March, Shen Yanhe, the deputy director of the Machine Tool Division of the Ministry of Mechanical and Electrical, inspected our factory. Our factory was appraised as the “Advanced Unit for the Construction of Civilized Units” by the municipal government and municipal economic commission ". 1993-95——Our factory was rated as “Star Enterprise” of Changsha Mechanical System and “Outstanding Enterprise of Target Management” of Provincial Mechanical System;
The TC28K machining center imported from Germany has been commissioned to make it bigger and bigger, and is running normally;
"Changsha Evening News" and "Changsha Technical Supervision News" articles, CW6163C lathes are reliable products. 1996-2000——Our factory was appraised as "Excellent Unit of Equipment Management" by the Provincial Economic and Trade Commission;
In April 1996, the company name was changed from "Changsha Second Machine Tool Factory in Hunan Province" to "Hunan Changsha Second Machine Tool Factory";
In June 1997, "Changsha Jinling CNC Machine Tool Industry Co., Ltd." was officially established;
In January 1999, the whole plant was adjusted, and nine branches and 18 departments were established. 2000-2001-the factory entered the preparation period for restructuring, Obtained the "People's Republic of China Import and Export Enterprise Qualification Certificate", and the products began to go abroad through self-managed export. On March 14, the company (2002) No. 04 file send a report on application for restructuring to Changsha Machine Tool Industry (Group) Company. 2003—November 1st, Changsha Evening News A2 published the "Changsha Second Machine Tool Plant Restructuring Announcement", and the enterprise completed the restructuring;
After the restructuring, employees will set up "Changsha Jinling Machine Tool Co., Ltd.";
In November of the same year, it was awarded “Hundred integrity demonstration units in Hunan Province”. 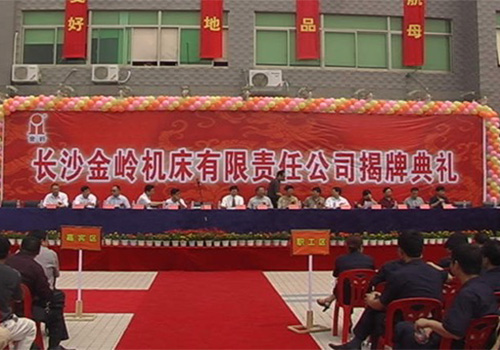 In January 2004, the Changsha Administration for Industry and Commerce approved the change of the company name to "Changsha Jinling Machine Tool Co., Ltd.", and Jinling people officially began to write the brand-new chapter of Jinling Machine Tool.
In December 2004, the new factory of Changsha Jinling Machine Tool was completed in Lugu Industrial Park, a national high-tech development zone. On December 15, the relocation of the main body of the company kicked off. Jinling people, facing severe cold and wind and rain, successfully and efficiently completed the relocation of the main body of the company within one month, and achieved brilliant results without stopping production and reducing production. 2005——Changsha Jinling Machine Tool Co., Ltd. was recognized as a "High-tech Enterprise";
In August, the company held the first shareholder representative meeting, which approved the plan to invest in Ningxiang Xiaduopu to buy land to build a foundry plant and establish "Changsha Jinduo Machinery Co., Ltd.";
In September, the wholly-owned subsidiary "Changsha Jinduo Machinery Co., Ltd." was listed in Xiaduopu, Ningxiang. On October 1, the firing ceremony of the first furnace was completed. 2008 —— "Jinling" trademark won the title of "Hunan Famous Trademark" In June, the opening ceremony of Changsha Jinling Machine Tool's wholly-owned subsidiary-Changsha Jinling Electromechanical Co., Ltd., was grandly held in Changsha Qingyuan Hotel;
In August, the acceptance team composed of experts from the relevant departments of the Hunan Provincial Department of Commerce and the Ministry of Finance and other relevant departments inspected our company's "Optimization of Mechanical and Electrical and High-tech Product Import Structure Fund Project—XH Series Vertical Machining Center (including 5-axis linkage)" and passed it. 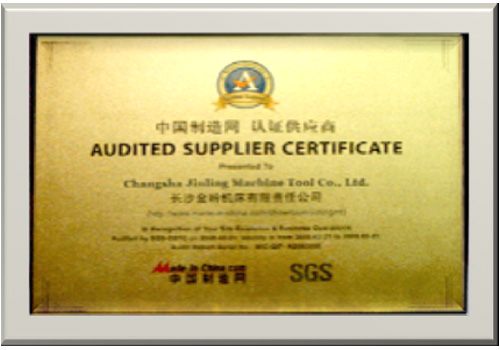 2009年——公司获评“湖南省质量信用A级企业”。
2009——The company won the appraise of “Quality Credit Grade A Enterprise of Hunan Province”.
In February, the company won two honors： the "Advanced Enterprise with Tax Over 5 Million Yuan" and "Excellent Independent Brand Award"
In May, CW61 (2) 63C and other products produced by the company passed the EU Compulsory Product Safety Certification (CE Certification) in Changsha High-tech Zone in 2008; 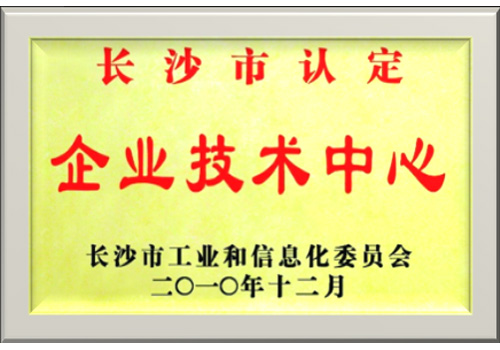 2010-The company's technology R & D center passed the certification of "Municipal Technology Center".
The company was awarded the title of "Advanced Enterprise with Over 5 Million Taxes";
In December, our company was awarded the title of "The Sixth Batch of Municipal Enterprise Technology Centers in Changsha" by the Changsha Industrial and Information Commission; 2011——The company's CKD6183 series CNC turning and milling compound machine tool industrialization project was approved as "National Torch Program Project";
The company produced a total of 1,247 sets of various machine tools throughout the year, and completed a product output value of 155.29 million yuan. 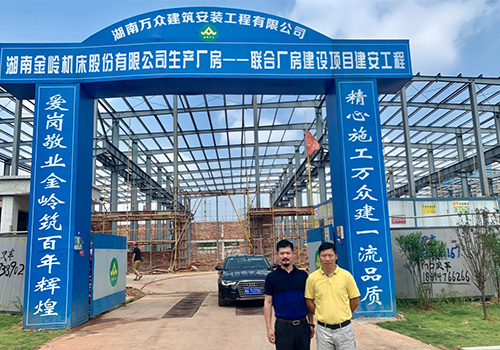 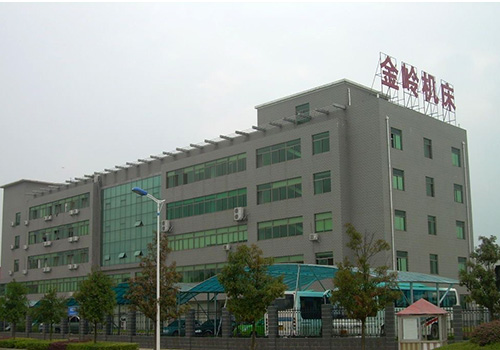 High-speed growth period
Began to walk out of South China, toward the country, and enter in rapid growth period
2019-The new plant of Jinling Co., Ltd., located at No. 9 Huaxiang Road, Changsha Economic and Technological Development Zone, is completed and put into use. "Jinling Co., Ltd." sails towards new goals with a new look. 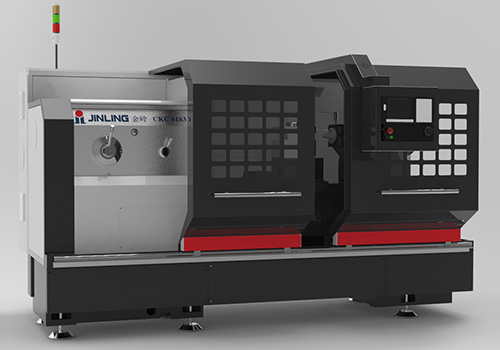 Started out of South China
In 2020, the Group's headquarters is investing a lot of money in new R & D and customer support. Looking forward to the future, Mr. Lei Limeng, the chairman of Jinling, is full of confidence: "Our company has gone through a glorious 63 years. In the new era represented by President Xi Jinping, We will launch more new products to further strengthen our leading position in the domestic and international markets. " Re-establishing the company's product range and turning its attention to the latest technology and the latest design in the industry. Since then, the beautiful appearance of the JINLING series of black + off-white machines is pleasing to the eye and has become a beautiful scenery.